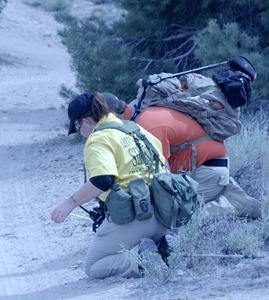 SO THAT OTHERS MAY LIVE

The Lyon County Sheriff's Search and Rescue started out as the North Lyon County Sheriff's Mounted Posse in 1972. Meetings were held in the Fernley Volunteer Fire Department building by the founding members, including Fern & Jerry Roberts, Herb Parker, Elmer Rowen, Darlene & Bill Clegg, and John Bremmer. The original uniforms were the same as the Sheriff''s Department Officers: Tan shirts, brown pants, black belt, boots and jackets. Members were allowed to wear guns. The only real difference was the arm patch, which identified the team as the Sheriff's Posse.

Over 30 years since the inception of the Sheriff's Posse, the group has increased its membership and experience. Most of the job is to search for and rescue people in trouble out in the wilderness or people stranded or missing in park and recreation areas, such as Lake Lahontan. Other duties include searching for downed aircraft, evidence searches, finding escaped prisoners or locating possible criminals who are evading law enforcement personnel, assisting with mine shaft rescue missions, and many other emergency situations.

The LCSSAR has also rescued some animals in trouble, including a dog who fell down a mine shaft and a young fawn trapped in the Truckee-Carson Irrigation Canal but was to weak to get out by herself.